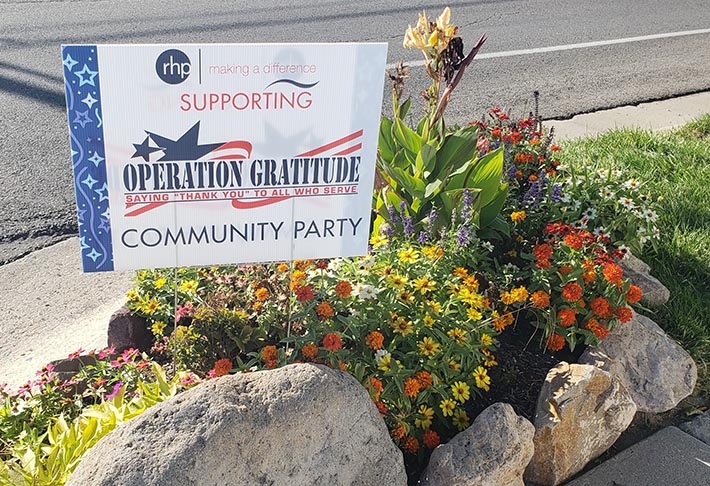 Operation Gratitude is the largest nonprofit in the country for hands-on volunteerism in support of Military, Veterans, and First Responders. Since 2003, the organization has delivered more than 2.4 Million Care Packages and has provided opportunities for countless Americans to forge strong bonds with their Military and First Responder heroes through volunteer service projects, acts of gratitude, and meaningful engagements in communities nationwide. The announcement was made by Ross H. Partrich, CEO, RHP Properties.

RHP Properties officially began its corporate partnership this summer and was proud to provide Operation Gratitude with a donation of $10,000 to support their Care Package programs, benefitting deployed troops, veterans, first responders, military families, wounded heroes and their caregivers.

In addition to the financial support, RHP Properties has hosted several letter-writing parties, involving both staff and residents. The letters and drawings from each event will be sent to Operation Gratitude for inclusion in their Care Packages for U.S. Military and first responders. RHP plans to expand the program to include additional properties in this important initiative in the future.

"RHP Properties is honored to partner with Operation Gratitude. This initiative gives both staff and residents the opportunity to show their appreciation to those who serve our country," said Partrich. "Our residents across the country are enthusiastic to participate in these letter-writing parties. Receiving personal appreciation such as a hand-written letter means a great deal to our first responders, military personnel and their families."

RHP Properties specializes in, and continues to aggressively seek, acquisitions throughout the United States. Owners of manufactured home communities interested in selling to a highly experienced owner and operator should contact Joshua Mermell, Senior Vice President of Acquisitions at 248-626-0737.

About Operation Gratitude
Demonstrating that actions speak louder than words, Operation Gratitude, a 501(c)(3) organization, provides tangible ways to forge strong bonds between Americans and their Military and First Responder heroes through volunteer service projects, acts of gratitude, and meaningful engagements in communities nationwide. Through its customized Care Package programs, Operation Gratitude has provided opportunities for countless Americans to say “Thank You” to more than 2.3 million of our nation’s Heroes since 2003. In 2019, Operation Gratitude launched its Make Every Minute Count Campaign with the goal of delivering 525,600 Care Packages – one every minute of the year – to Service Members, their families at home, Veterans, and First Responders. Awarded a 4-Star rating from Charity Navigator and a Platinum rating from GuideStar, 94 percent of Operation Gratitude’s expenditures go directly to programs that support our nation’s men and women in uniform at home and abroad. To learn more, visit operationgratitude.com.

Prev
See All News
Next